A game of strategy & fortune developed for friends of SHV.

In this fast-playing card game, the goal is to collect the best combination of talent, leaders, and funding to make your company successful. Score additional points for collecting the most customers or stacking up office furniture. Triple your points and secure loyalty with a perk when you hire your next perfectionist designer or ultra-specialized engineer. Watch out for the recruiter or they'll steal your talent while you are busy wooing leaders. Wrangle the most points to crown yourself the king of the Talent Zoo! 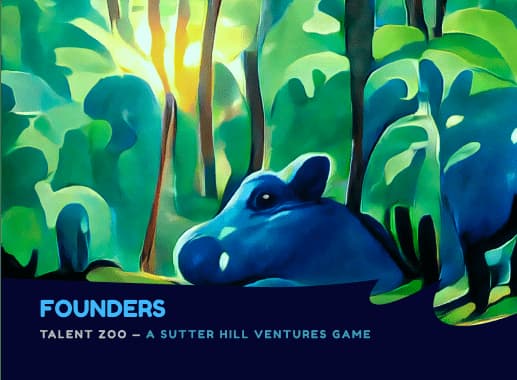 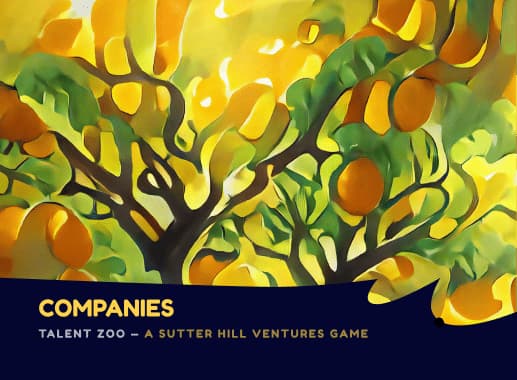 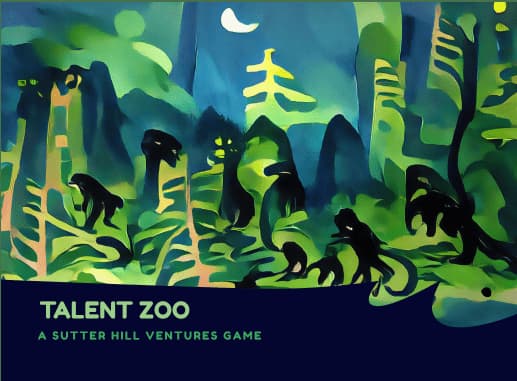 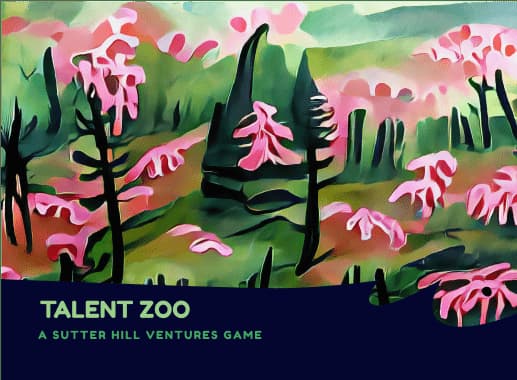 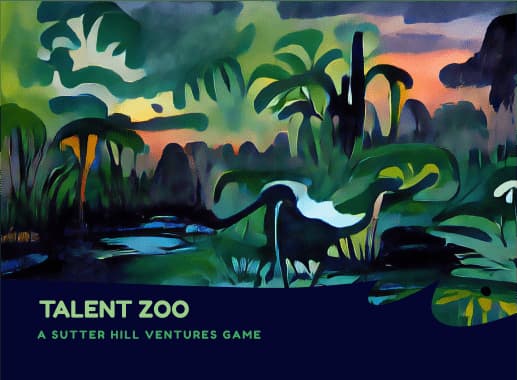 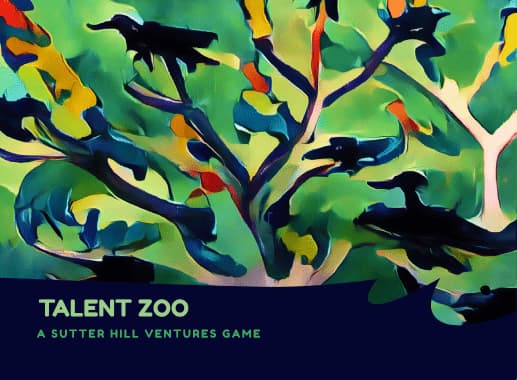 SHV recruited the excellent help of Maria Keller to illustrate the animal-based characters that decorate and differentiate all of the cards used for play. 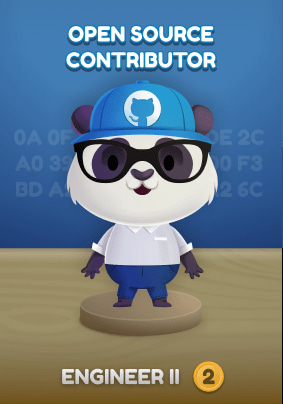 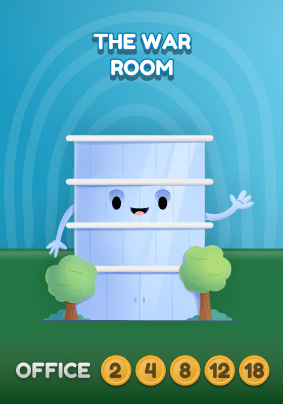 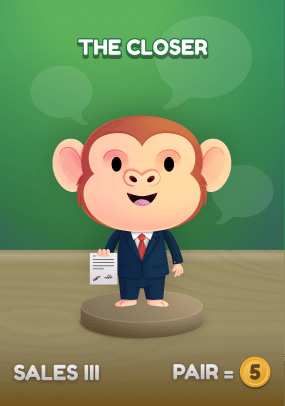 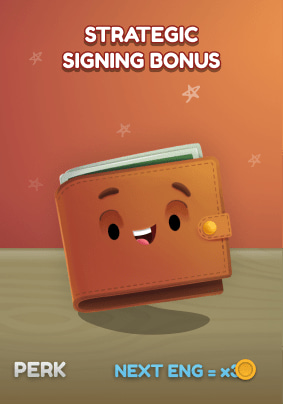 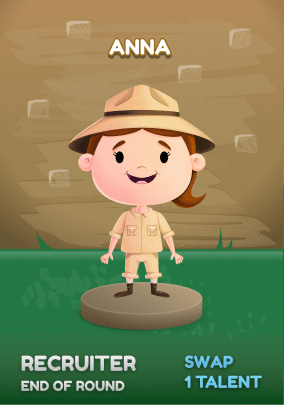 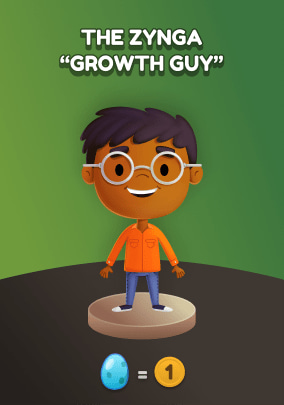 Q: When does scoring happen?
A: Scoring happens at the end of each round. Then after 3(or more if you want) rounds are played, the individuals scores from each round are added up to determine the winner. Highest points wins.
Q: Why can I not find Talent Zoo in stores?
A: Talent Zoo was developed by Sutter Hill Ventures as an exclusive gift to friends and family. After it was recieved so well we decided to release it independently through Sutter Hill’s online store.
Q: When is the Recruiter used and what can it steal?
A: At the beginning of scoring Recruiters are used. The person who has placed a Recruiter card in front of them swaps it with someone else's played Talent card. A Talent card played on a Perk, or a paired Sales card, cannot be swapped with. The player who started with the Recruiter card now gets to count their new Talent card in their scoring. The other player does not get any addition to their score, but instead they start the next round with the Recruiter card already played in front of them.
Q: Can you chain together Funding cards?
A: We don’t have an official rule on this, so feel free to create your own house rule! The correct answer is “if its more fun for everyone, then thats the rule!” By our house rules if you play a funding card, and draw another funding card you discard it, but it counts as a draw. So it's possible to try to raise a round and get nothing out of it.
Q: What happens when I have hand filled with funding cards I cannot play?
Play and discard one of the funding cards.
Q: When are recruiters played?
Recruiters trade cards at the end of the round, before scores are calculated. If there are multiple recruiters in play, perform each trade in clock-wise fashion starting with the player who dealt the hand.
Q: What can a recruiter trade? Can they trade Leaders?
In the optimistic world of Talent Zoo, leaders can't be poached. Recruiters can only swap Engineers, Designers and Sales people.
Q: Can a recruiter swap talent to or from a perks card?
Yes! A recruiter can poach an Engineer and place them on a perk card. We assume the recruiter used the perk to get the talent in the door. Talent that has been placed on a perk card is considered loyal and cannot be poached by a recruiter.

For your first game, set aside the Founder & Company cards.

In a 3 player game, deal 9 cards to each player.

In a 4 player game, deal 8 cards to each player.

In a 5 player game, deal 7 cards to each player.

(Keep your cards a secret from opponents.)

The game takes place over 3 rounds. To start a round, all players simultaneously choose any 1 card from their hands that they would like to keep and place it face-down in front of them. When each player has done this, everyone reveals their chosen cards.

After revealing cards, pass your remaining hand face-down to the player on your left. Everyone picks up their new hands and the next turn begins. You now have a new and smaller hand to choose from.

NOTE: Face-up cards remain with you until the end of the round, when they are scored. It is helpful to group cards of the same type together.

If you play an Engineer or Designer card, and already have a matching Perk card in front of you, then this Designer or Engineer can be placed on top of the Perk. This is to show that the talent has been properly incentivized and has tripled in value!

After revealing a Funding card in front of you, draw the amount of cards from the draw pile that corresponds with the Dollar Coin count on the Funding card. You then pick one of those new cards to place in front of you for later scoring. The remainder of cards drawn are placed in the discard pile.

A player cannot play a Funding card unless it’s Dollar Coin count is equal to or greater than the largest Funding card already in front of them. This is called “No Down Rounds”. If you cannot play due to this rule, you discard the Funding card for your turn.

NOTE: Funding cards on their own provide no score at the end of a round.

When the final remaining card of each hand is passed on, simply place it face-up with the other cards you have collected.

(Often this final card won’t be of much use, but sometimes an unfortunate player will be forced to leave you with something valuable!)

Each player adds up the egg icons at the top of all their Customer cards. The player with the most icons scores 10 points. If multiple players tie for the most, they split the 10 points evenly (ignoring any remainder) and no second place points are awarded.

The player with the second most icons scores 5 points. If multiple players tie for second place, they split the points evenly (ignoring any remainder).

Example: Bill has 5 egg icons, Madeline has 3, Reshma has 3, and Sam has 2. Bill has the most and so scores 10 points. Madeline and Reshma tie for second place, and so divide the 5 points between them, scoring 2 points each. Sam scores nothing.

At the beginning of scoring Recruiters are used. The person who has placed a Recruiter card in front of them swaps it with someone else’s played Talent card (Sales, Engineers, or Designers). A Talent card played on a Perk, or a paired Sales card, cannot be swapped with. Swapped cards can be placed on an unused perk card, if available.

If more than one Recruiter cards are on the table, they are played in turn order based on who last dealt. Talent cards may only be swapped by a Recruiter once per round.

Funding cards provide no points at the end of a round.

A set of 2 Sales cards scores 5 points. A single Sales card is worth nothing. You may score multiple sets of Sales in a round.

Engineer & Designer cards come at various levels and with various points. Score each card with the number in it’s gold coin on the card. If played on a corresponding Perk card triple that number.

Example: “Open Source Contributor” the Engineer II card that is worth 2 points played on top of a “Strategic Signing Bonus” would be worth 6 points total.

The more Office cards you have, the more points you will score, as follows:

Similar to the Office cards, the more Leader cards you have the more points you will score. A difference is that you cannot gain points for 2 Leader cards with the same name.

Starting a New Round

After the third round is scored, there may be some cards remaining in the draw pile. These are ignored.

AND THE WINNER IS…

Whoever has the most total points after 3 rounds is the winner. In case of a tie, the taller of the tied players wins!

Founder cards provide scoring modifiers for the player that has that particular Founder card.

These can be introduced from the beginning, only on the last round, or even drawing new ones each round. Founder cards should be shuffled and dealt 1 each, but after a player receives a Founder card they should place it on the table in front of them for other players to see.

"The Zynga 'Growth Guy'" gives that player 1 additional point for each egg icon in front of them.

"Superforce 4.0 CRM Guy" makes each Sales card worth 5 points instead of scoring them in pairs.

"Slick McKinsey Consultant" makes Office cards each worth 4 points flat, instead of the value on the card.

The Company cards provide a bonus amount of points if you end the round with it’s stated requirements played in front of you.

These can be introduced into your game however you wish. A new one each round, only on the last round, or drawing new ones if you complete your given one. These cards should also be visible to all players.

Example: Sam has the BeeSafe Company card. At the end of the round he has 1x Engineer I, 2x Engineer III, 2x Office, 3x Dollar Coins(Funding), and 1x Leader card.

Sam gets 5 additional points this round because he has met these requirements. One of his Engineer III cards fulfills the 1x Engineer II+ requirement.